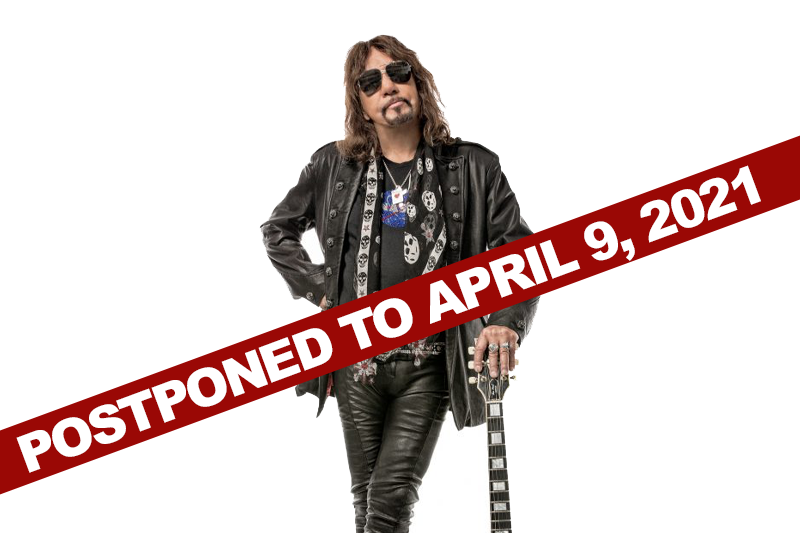 In Late 1972, Ace Frehley with help from friend Chris Cassone, responded to an advertisement for a lead guitarist in the band The Village Voice. Shortly after being given the job, and dealing with obvious shortcomings, the band became known as Kiss in January 1973 and released their debut album in February 1974. While he co-wrote various songs during the early days of Kiss, Frehley didn’t record any vocals for the band until “Shock Me”, a song on the 1977 album Love Gun. Frehley’s time with Kiss came to an end in November 1982, last appearing in “I Love it Loud”, a series of promotional events in Europe.

The concert includes classic rock hits from the original KISS guitarist and R&R Hall of Fame inductee. The success of Ace Frehley’s solo career, as both a recording artist and performer, has easily outpaced his KISS band mates. His 2014 release Space Invader was the only post KISS solo album to crack the Top 10 on Billboard’s Top 200 albums chart, and his acclaimed 2011 autobiography No Regrets went on to become a New York Times best-seller. Ace’s latest album, Origins II, was released in 2020 and featured guests Robin Zander (Cheap Trick) and Lita Ford. Ace is best known for his solo hit "New York Groove" and "Into The Night."

As we continue to move forward with the reopening of the venue, the safety of our patrons and employees will be our first priority. We will follow the guidelines as set forth by the Responsible Restart Ohio program. With that being said we urge you to come spend the night with us at Robins enjoying Ace Frehley's headlining concert. The office and box office remain closed due to the COVID-19 shutdown but more information is available at https://robinstheatre.com, or our facebook page or via email at contact@99t.71e.myftpupload.com.

Tickets will be available online only and go on sale Friday, June 12th at 10 a.m. on robinstheatre.com. As the social distancing guidelines for indoor concerts has yet to be established, seating for this concert will be general admission.

Buy your tickets ONLY from the Robins Theatre Box Office, at RobinsTheatre.com or by phone at 234.437.6246. We cannot guarantee price, authenticity or admittance for tickets purchased elsewhere and we cannot issue replacement tickets if they are lost. Help us keep ticket prices affordable and fair for all.